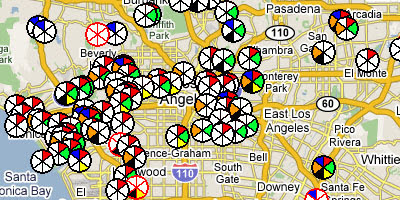 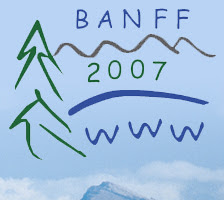 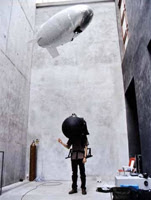 "[...] (photo by Saxinger) Floating Eye (2001), by Hiroo Iwata (VRlab), is an interactive installation that separates vision from the body. The participant can only see wide-angle image floating in the air. The image is captured by a wireless camera attached to an airship, pulled along by the user. The participants can see themselves from above, along with the surrounding area.
A large helmet provides the immersive experience. This helmet contains a convex mirror, with a projector mounted at the rear, so the image takes up the users whole field of view. The movie belows shows how this works. Movie (10mb mpeg) More images and video."

"(photo:Kurokawa Mikio) The Inter Dis-Communication Machine (1993), by Hachiya Kazuhiko, lets two participants see things from the other persons perspective. The site states “the concept to make it possible to kiss or to make love with the partner while keeping the machines on”".
Postado por Fernanda Bruno às 22:15 Nenhum comentário: 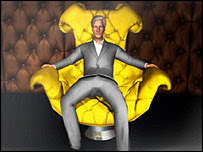 "Big Brother maker Endemol is to launch a virtual world where people can take part in familiar games and shows.

Three dimensional worlds such as Second Life, which allow people to create online versions of themselves, have built up a large following.

Virtual Me will allow these avatars to compete in online versions of Deal or No Deal, Fame Academy and Big Brother.

Endemol and computer game company Electronic Arts said the site would be launched "in the coming months".

Bosses at the two firms said it was a concept that bridged the divide between traditional TV and video games.

"With Virtual Me we are at the forefront of a new, hybrid form of entertainment that takes gaming beyond the console," said Gerhard Florin, Executive Vice President and General Manager of EA International.

"Endemol is a great partner to help us bring together the best of TV and video games for an offering that can appeal to mass market audiences and change the face of entertainment." "

"Exposure is a spatial art installation combining smart materials, simple sensor electronics and poster design to weave micro narratives for the unsuspecting public as they navigate through the urban landscape. An array of unobtrusive, monochromatic posters is arranged along a segment of a passageway. Adjacent to the individual posters a light gate is watching when a pedestrian passes by the poster. The light gate is connected to a tele-objective camera flash and triggers it, casting the person’s shadow momentarily on the poster. The poster, being covered with fluorescent ink, captures the shadows and retains the glowing silhouette, becoming an integrated element of the poster’s graphics which gradually fade away. The work can be seen as a commentary and counter-reaction to the established disempowerment of the individual. Above and beyond the exhausted Big Brother discourse, Exposure takes a stand also on the new emergent "Participatory Panopticon", or "Little Brother", the ever present prying eye of the neighbours’ ubiquitous camera equipped digital device".
Postado por Fernanda Bruno às 18:01 Nenhum comentário: 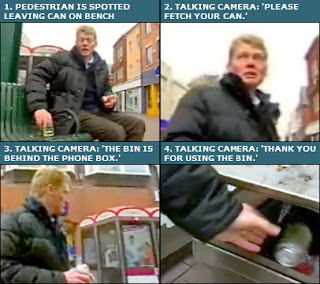 "Talking" CCTV cameras that tell off people dropping litter or committing anti-social behaviour are to be extended to 20 areas across England.
They are already used in Middlesbrough where people seen misbehaving can be told to stop via a loudspeaker, controlled by control centre staff.
About £500,000 will be spent adding speaker facilities to existing cameras.
Shadow home affairs minister James Brokenshire said the government should be "very careful" over the cameras.
Home Secretary John Reid told BBC News there would be some people, "in the minority who will be more concerned about what they claim are civil liberties intrusions".
"But the vast majority of people find that their life is more upset by people who make their life a misery in the inner cities because they can't go out and feel safe and secure in a healthy, clean environment because of a minority of people," he added.
The talking cameras did not constitute "secret surveillance", he said.
"It's very public, it's interactive."
Competitions would also be held at schools in many of the areas for children to become the voice of the cameras, Mr Reid said.
Downing Street's "respect tsar", Louise Casey, said the cameras "nipped problems in the bud" and reduced bureaucracy. " 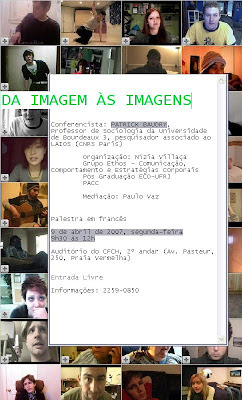 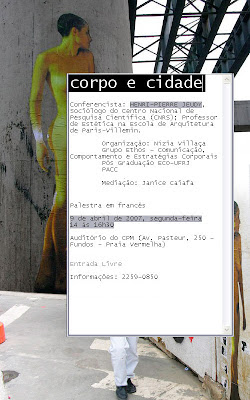